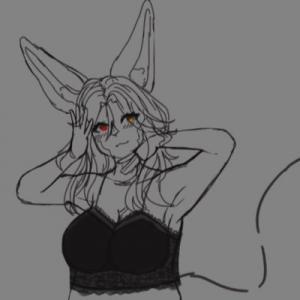 Linari Aldaara is an English speaking vtuber who mostly streams on Twitch, with the occasional upload to youtube. They play mostly JRPG style games and MMOs, and branches out sometimes to other genres if it interests them.

They are currently in the process of a rebrand into a Kotobuki (amalgamation of the chinese zodiac), but they are still chubby.

Linari is an adventurer from the realm of Eorzea. They began their life as a cat girl, or Miqo'te, before being subjected to harmful experiments by the infamous Aldaara family. Upon being rescued by her mother and subsequently watching her die as a result, she set off to become an adventurer, and later the Warrior of Light, in a quest to gain power in order to crush the family that ruined her own.

After many tough journeys and battles, she has currently found herself in a period of calm and short peace. Thanks to the dimension-hopping magicks she was exposed to, she has made a connection to another shard of the Source, our realm, and has taken a liking to our media and cultures.

Her form has shifted to that of a Viera, though she has kept features and qualities of her past forms. Her overall stature is that of the tall rabbits of the Viera, a long, massively fluffy tail to represent her birth as a Miqo'te, and scales covering various parts of her body as a result of her mother's heritage and blood.