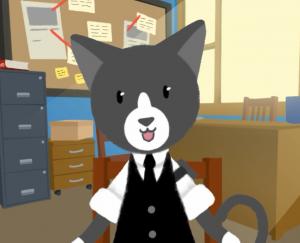 Tuski Brown is an English Virtual YouTuber and Streamer with a light, gentle voice. His streams are mainly playthroughs of story-driven video games, with occasional tangents on Tuski's occupation as a butler who works for a private detective.

Tuski is an anthropomorphic cat with grey fur, white paws and a white muzzle with a white blaze. He wears a white collar shirt, a black waistcoat and a tie as his butler livery. On his left shoulder, Tuski has an insulin pump strapped to himself. Tuski's character model has a gouache paint characteristic to it, reminiscent of children's books.

Tuski is a polite, calm person with a love of tea and jazz music, talking about sipping tea and playing smooth jazz during livestreams. He writes and speaks with an educated voice and uses minimal to no swear words. His videos have a wholesome and relaxing tone to them.

He does not like mess, taking pride in cleaning Detective Mel Ambrose's office, and talking about how messy the place originally was with a shudder.

Tuski is not knowledgeable with technology, needing help from Mel to learn how to use Twitch. Tuski also appears to get annoyed by Mel Ambrose's actions, including Mel's references to memes and use of puns.

The two of them work as foils to each other, Tuski being more silver-tongued and graceful (once seen balancing two cups of coffee on his head to avoid spilling them) and Mel being more awkward and chaotic (having trouble talking to clients at his detective agency). Mel knows about memes and pop-culture, while Tuski considers jazz music to still be modern. These clashes sometimes cause Tuski's otherwise calm nature to crack.

Tuski is a cat who was born in 1915 and raised by his grandfather. He became a butler to Eugene Ambrose around 1935 because he needed the money and Eugene was of a rich family of foxes. During this span, Eugene is framed for a crime and Tuski takes on the role of acting as a detective to clear his name.

During the 2010s, Tuski meets and partners up with private detective Mel Ambrose (a descendant of Eugene), and together they solve mysteries.

Between cases, Tuski livestreams detective and butler-themed games. Mel set up the VTuber equipment and software for Tuski. The first game that Tuski debuts with, Tally Ho!, was recommended by Mel, describing it as a "butler simulator."

Although other characters have not made an appearance on streams, Tuski often references other people, including Detective Mel Ambrose. Tuski also knows a white cat named Inspector Snow, though Snow does not appear to like Mel.

Tuski will also occasionally Tweet on artist Katy133's account, signing posts with "-Tuski" when they're written by him.

It is left unexplained how it's possible for Tuski to have been born in 1915, yet able to Twitch stream in 2020, whilst still remaining 22 years old.