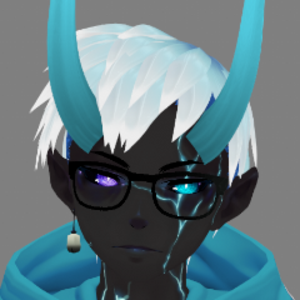 Jeremydi is a vtuber who is a variety streamer on twitch. They speak both english and spanish, but mainly use english during stream.

He was originally a sinner that went to hell for killing a bus full of fortnite players. In hell he became an oni. All the other hell residents agreed that he shouldn't be there, so he left out the hell gate that led to the ocean where he now resides for easy access back into hell. Once on earth he decided to travel the globe from ocean to ocean messing with people like a sea monster using his oni tentacle powers uwu. He then happened to find a tentacle shark that enjoyed doing the same and they became his pet. Upon his travels the ancient ones were not pleased and tried to smite him as an attempt to sleep in peace. But he lived! His pet dragged him to safety where he decided to rebel against the ancient ones. He lost horribly but he was able to steal some of their power and store it in his jacket.