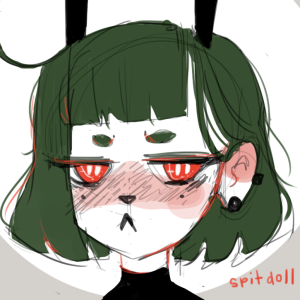 SpitDoll (aka Spit) is a virtual hybrid bunny NPC from an online video game. She mostly streams Pixel and Digital Art to Twitch (and sometimes games).

SpitDoll (aka Spit) is a Half Human/Half Bunny hybrid and an NPC Potion Shop owner in an online MMORPG.

Something went wrong one day when Spit was crafting a potion. There was a weird glitch while brewing that somehow caused a huge explosion. When she woke up, she had somehow gained sentience. The Adventurer who was waiting for his potion however... He was never the same after that.

After that incident, Spit was able to gain access to the internet through the video games servers and now spends most of her time drawing and streaming. She still does her job brewing potions for Adventurers and the King, of course!

Speaking of the King, she works for him as an "unofficial" "official" court potion brewer. She is the best in the land and the Prince recognized her skills. The King however, he's old-school and doesn't like that she's a "Doll" (In this world, characters that are part human/part animal hybrids are often referred to as "doll/dolls" and are generally looked down upon). The Prince convinced the King that she was needed in their court or some other kingdom would take her and use her skills for themselves, which would be dangerous... So now she's forced to live just outside the Kingdoms walls, that way she wont "taint the kingdom" but she's still close enough to be on-call for potion making.