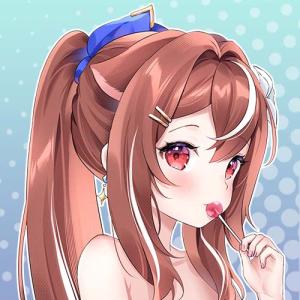 Fiwi's a very cute streamer from UK. He is mostly seen chatting with his chat or playing games, that is solo or in collab.

Speaking of games, he is known for holding the world record for bumping into the most trees in 5 minutes on Steep. He often plays Wallet Impact. He also has an aim that is as good as a golden mole can see. Legends say that if one joins one of his gaming streams without seeing a death/game over screen, he might have 10 years of amazing luck. Although, this theory has yet to be proven since there has been no record of a person experiencing it. He do be known for being a pro Connect 4 player and showing no mercy at that game.

Fiwi's also known for often saying lewd things before realizing it. This might be related to his addiction to saying "deez nuts" or his skeb commissions that are 90% NSFW.

Skeb is an important point too, his wallet do be skeb dependent. So dependent that Fiwi's been finding excuses for commissioning Skebs. On his stream, for the modest amount of 50 thousands Lunar Petals, you can "force" him into buying another Skeb.

The profile picture is provided by none other than the one and only, the amazing and very skillfull artist, nami_nyaa, you can find her on both twitter and pixiv (naminya)

Fiwi uses the form of his original character, Lilya Kyomi. Kyomi is a demi-goddess that masters both water and the stars. She is sweet, friendly, flirty, teasy, blushy. She is 164 cm tall and is born 23 years ago. Her chest is kind of well developped but some of the most ancient fans knew her as being flat...