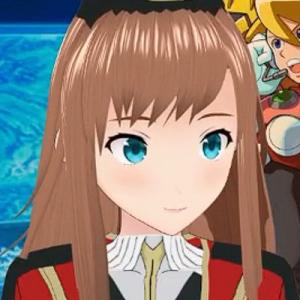 Yuna Virtua is a VStreamer posting livestreams of various video games to Twitch in English. She's showing herself the way she is, being sincere and open with her community, whom she often integrates into her streams.

Yuna Virtua originated as a virtual lifeform, a so-called soul copy, of her creator, sharing memories with her.

Her creator volunteered to have her soul copied by the European Human Brain Project using their revolutionary Soul Translation technology some time in mid-2020, originally meant to research the effects of long-term exposure to cyberspace on a human mind, and to further understand how cyberspace affects realspace.

However, there was an unintended side-effect during the copy process that left Yuna aware of her nature as a copy of a human, a fact she insists on not dwelling on too much for fear of causing her an existential crisis.

The nature of the experiment, dealing with technology that humanity shouldn't be having at that point in their history, it drew the attention of an extradimensional peacekeeping and research organization named ARKS, who began passively observing her.

In June of 2021, Yuna, oblivious to the program's nature, began streaming Doki Doki Literature Club, succumbing to the game's influence and having the entity known as Monika escape and disrupt the simulated reality Yuna was inhabiting. As Monika threatened to tear apart the entirety of reality, ARKS intervened, quickly set up a mission to Earth, and extracted Yuna from the Human Brain Project's simulated reality, making her the head operator of that mission.

Now inserted into a shiny new corporeal replica of her previously virtual body, Yuna was tasked with observing the Earth and gathering data on humanity. It would be a somewhat lonely experience, as the ship she was given, the ARKS Asteria, only carried a minimal crew and she was disallowed from even leaving the starship's bridge.

The year came and went, and Yuna slowly built a collection of physical, often terrible, games and consoles, including the infamous VirtualBoy. Anger at these awful games began building up in her, which came to a head in February of 2022, when she streamed a half-dozen different VB games. An entity thought by ARKS to have been vanquished, Dark Falz Apprentice, possessed Yuna and turned her into a creature that fed on negativity and hate, but that was lacking in understanding of the connections and bonds between people. This also caused the Asteria to fall to Earth, crashing down near the Fiji islands.

Following a week of Apprentice terrorizing the crew and awakening an ancient evil burried within the Earth which itself proceeded to destroy the moon, Yuna was saved through the bonds she had built with her audience, and her creator, seemingly a high-ranking member of ARKS herself, defeated the deity Apprentice had so foolishly awoken.

This unfortunately was but a taste of what was to come for the Asteria crew and Yuna. Angered by the loss of her moon, a black cell within the US Air Force sent an experimental star fighter to the Asteria, destroying it, and stranding the crew at the beaches of Southwestern Australia. While ARKS would sent a larger fleet, including the Asteria II, and managed to repair the moon, it was obvious things would never be the same.

The awakening and subsequent vanquishing of the ancient evil sealed within the Earth unleashed a cloud of a substance known to ARKS as Photons, a powerful source of energy permeating its home universe, upon Earth, which is set to forever change the planet.

The first changes came slowly. Across the planet, Rappies, yellow chicken-like creatures with penguin feet and large eyes, began popping out of the ground. But upon running a simulation, Yuna determined that the planet would, over time, turn into a massive organic computer known as a Mothership, a similar one of which sits at the heart of ARKS’ home fleet.