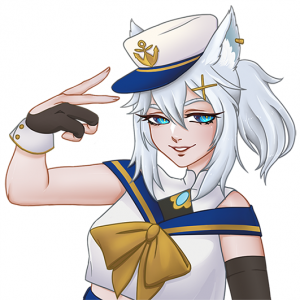 Dandyfloss is a virtual streamer and YouTuber that makes English content. She primarily focuses on video gaming, with featured Beat Saber or VR game streams every week. She is a friendly, approachable streamer who encourages everybody who watches her to talk with her and the rest of her chat, building a friendly and welcoming community. Although her content itself is not adult themed, she does not cater towards younger audiences and frequently makes crude remarks and jokes. Dandy built a reputation as being realistic with her audience, often showing behind-the-scenes processes that go into her work.

As a young cat, Dandy was abducted from her family by pirates and taken to sea. She was taken aboard by Captain Barkstrom of the Barkonneers, where she was raised as the only cat aboard a ship of dogs. She learned to love the sea, learning sword fighting and sailing.

One day over a round of drinks, the Barkonneers let slip that Dandy was stolen, and she immediately abandoned the ship at the nearest port. Not knowing how else to make a living anymore, Dandy used her seafaring skills and experience to get herself a job aboard a merchant vessel. Rising through the ranks aboard, she learned how civilian ships worked, but the captain of that ship heard of the bounty on her head from the Barkonneers. Fueled by his greed for the prize money, he arranged for a trade at sea, the girl for the money.

Dandy soon learned of this when the pirates arrived. She fought off the pirates with the same sword skills they taught her, and managed to escape with Captain Barkstrom's coat and boots as well. Stealing a skipper, she rowed back to mainland, acquired a vessel of her own, and decided to wait for the day she can enact revenge on the pirates that abducted her and the merchant captain that sold her out.

Captain Dandy passes the time by taking civilians out on luxury cruises aboard her yacht. All entertainment provided, she uses her polished sword skills to play Beat Saber for her passengers. The ship itself is a 50 foot motor yacht with many facilities, including pool, hot tub, bar, lounge, gym/clothes rack room, VR playspace and many bedrooms. She hires her Twitch subscribers on as crew for the ship.