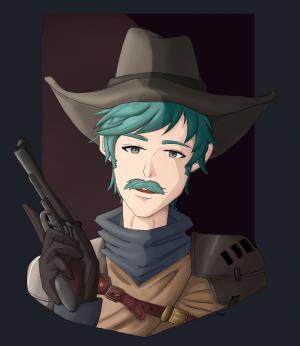 Walker is an independent male VStreamer and occasional VTuber who makes content in English. He makes mostly gaming content, with occasional voice acting and singing content. He also weaves voice acting content into certain games he streams, doing his own made-up voices for the in-game characters. His Twitter account was created on October 30, 2020 and his first Tweet was made that same day. His first stream was on January 31, 2021, as a PNGTuber. He later received a Live2D model and revealed it on February 21, 2021 in a "second debut" stream. Walker is a Texan born and bred, and is aggressively proud of such. He also thinks rather highly of himself at times, though this is mostly an act, as he believes this behavior to be manly and cool. He also enjoys working out and wants to be swole.

Walker ran away from his hometown when he was a young adult. He felt constrained and that he did not belong there, so set out to find himself and his place. After many years wandering alone, Walker had almost given up on his hopes, wondering if there was no place for him at all. It was at this low point that he somehow discovered the virtual world and VTubing. Feeling he had nothing to lose, he decided this was his last chance to find a place to belong.