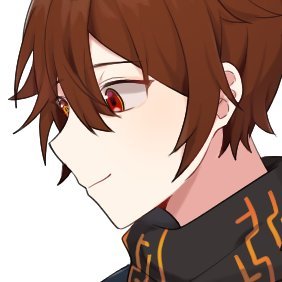 Soma Rigel (ソマ ライジェル) is an Independent male English/Filipino Yatagarasu VTuber. He currently streams on both YouTube and Twitch via Restream.

Soma is a Yatagarasu, the surrogate son of Amaterasu, the CEO / Head Deity of the Sun. He was sent down to the Underworld to regulate its flames and made friends with the locals. One of his friends was the Prince of the Underworld, Cyrus Capsaicin (also known as "sample text" in his streams). Soma stayed in there for thousands of years living in a concrete house he built himself, solving incidents and defeating rogue denizens trying to take control of the Flames. During this stay, he also forged countless weapons and awakened a hidden power to have a pocket dimension for storage of said weapons. These weapons however were too fragile for Gods so Soma can only use each "disposable" weapon a total of three times. One day, he was kicked out of Hell, due to a thermostat usurping his purpose in the Underworld, even to Amaterasu's surprise. After moving to the Surface World, he was told by Amaterasu that he were to become her Acolyte. Being an Acolyte meant : living in the parent God's place of worship, contribute to the shrine and doing missions to gain a certain amount of religious faith, the source of every God's power. Soma did not want to live in Amaterasu's shrine and desired to live among the mortals, which Amaterasu reluctantly agreed in with some conditions of course. Soma wants to live among mortals in secret to not stand out and so he can live like them to learn more about how the mortal world works. This is where he found out about the internet and VTubing. Soma became a Yatagarasu VTuber for fun, in which he realized later that followers he gained as a VTuber actually gave him faith. The young God decided to now grow his faith through the Internet while masquerading as a student in a university, while also protecting his world from Otherworldly threats.