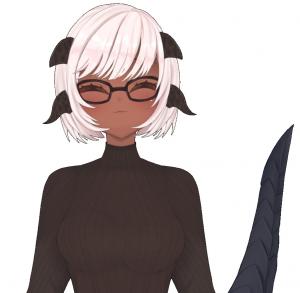 An English-speaking, coffee-drinking VStreamer, Joyeuse is a human / Western Dragon hybrid who shifts between playing retro and classic games, whilst trying newer, more relevant games. Under her major stream list, she prioritizes games she hasn't completed yet or seeks to complete with friends. Her primary non-major streams are Final Fantasy XIV, Arknights, and a myriad of fighting games such as DBFZ, Guilty Gear, BlazBlue and Smash Bros.

After a long war between the corrupt Temple Knights and the peace-seeking dragons ended in needless bloodshed, Joyeuse lost her mother and her father, leaving her alone in a cave nestled only in the warmth of her father's corpse. Almost a century later, civilization found its way near her cave's doorstep; the digital age came crashing down upon her faster than she realized. Seeking to continue her family's lineage and strive for a greater peace, Joyeuse seized damaged technology that rested outside of her doorstep. Using the mortals' contraptions to her advantage, she would create her own "thrall--" a family of her own from near, far, wherever they are!

While at times not very bright, Joyeuse has good intentions at heart! Most of her adaptations towards the new human society were suggestions made by her "Dragon Crew." Years of solitude solidified her heart, and no matter what, she would be willing to extend a hand even if the feeling wasn't exactly mutual. More often than not, you can find her with a mug in hand--more often than not, others around her will have one as well, whether it be coffee, cocoa, tea, or even just plain water!