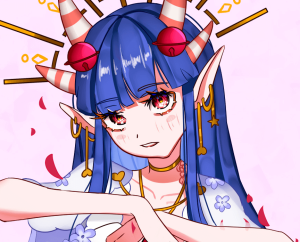 Dragon of Chaos | Resident of the Gardens in H3ll

Long ago, Dragons used to be born from Stars. People revered Dragons, believing them to be blessings and almighty beings. There were many species, that is until one day…the Stars stopped birthing Dragons. Species started going extinct. The Chaos Dragons panicked and started a war, wanting to be the dominant species. The war ended in even more lives lost, species went extinct, even the Chaos Dragons.

After the war, the Dragons hid themselves away from the others, in hopes of surviving and found other means to produce offspring. Thousands of years passed, and the tale of dragons was forgotten by the humans. However, a tiny isolated star suddenly shone bright, and from it came…a Dragon. The first Dragon to be born since the incident. The other Dragons who heard about this came to see, noticing her odd appearance. She seemed…different, a glitch of the universe that shouldn’t exist.

It soon became clear she was an extinct Dragon species, and the most dangerous one at that. The cause of the war, the Chaos Dragons. Once the Dragons learned about this, they all fled the young dragon, leaving her alone. For the first few years of her life, she was alone. Should she try to approach anyone, they’d simply run away. She couldn’t understand why she was forced to live a life of solitude.

That is, until one day the young Chaos Dragon was severely injured. Having seen her wound, an Ice Dragon approached her, the other Dragons seemingly thought he had gone insane. He approached her and yet she backed away from him, confused and scared. He offered to tend to the young Dragon’s wound and in addition he offered a place to stay, on a tiny isolated ice planet far away from the others. A place where she could roam free and explore, without having to worry about being alone. She was hesitant at first, but accepted his offer.

And so he took her back to his home, raising her like one of his own. He taught the Dragon many things, such as dragon customs, culture and history. She grew up feeling the comfort of having someone to care for and love her, as well as a home of her own. She even gave herself a name, Veyrhea Heart, Rheya for short. He taught her about the war, and the actions of her Ancestors. She swore to never go down the path they did, and to be peaceful to all others.

On that fateful day, The Three Gods approached her with an offer. To do as her Ancestors did, to cause chaos and bring havoc to planets across the galaxy, in return she would have eternal happiness. She declined immediately, and The Three demanded to know why. She told them she would remain peaceful, and they grew angry. They told her if she did not accept her offer, she would be considered a traitor to the Gods.

And yet she still declined. The Three kept their word and she was killed at their hands. The other Dragons were relieved, and so time went on. Thousands of years passed, and one day another lonely star shone bright. She was reborn, but however she was not welcomed. Having been considered a traitor by The Three, she was no longer allowed to live in Space, and was banished. The Three thankful were not aware of her rebirth, and so she fell down to Earth.

On that day, she landed in a bed of flowers and stardust. As she sat up, she was met with the view of a city in the distance. Instantly she rushed into the city, quickly noticing how out of place she looked. Many humans complimented her “cosplay”, which she had no idea what it meant, however she still nodded and smiled.

Eventually the Dragon made her way to Hell and without second thought, decided to move in. She moved into Circle Nine, and created a lush garden of roses and greenery. Yet she didn’t fit in, her appearance made her stick out like a sore thumb.

And so over the next few weeks, she went through many forms and appearances, struggling to connect with each one and fit in. However one day she looked at herself in the mirror, blue hair and red horns with white stripes, and she felt comfortable. Feeling happy with the new form, she picked up a heart shaped crystal she had found on one of many adventures, and sealed away her true form.

While setting into Hell, she learned about the Internet, something the Ice Dragon didn’t have. Through the internet she discovered VTubing, and found it fascinating. So she got to work, and got a human job. Over time she saved enough money and bought her first computer. At first it was scuffed and messy, but she learned how to stream properly and became a VTuber.

Through VTubing, she learned that she wasn’t alone. No one would reject her just for who she was born as. And it made her happy, to feel welcomed. Things were slow from the start, but over time she warmed up and showed her true self. For the first time since her death, she felt happy. And ever since then, she’s been streaming, meeting new people,making many new memories and experiences.