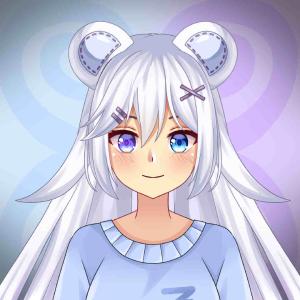 TheLadyFuyu (Fuyu or Lady for short) is an English VStreamer on Twitch who regularly streams and collabs with various other Streamers on the site. She is a CIS Gender Woman who has ASD (or Autism Spectrum Disorder) and is also AroAce (Aromantic Asexual) so while she tends to make the occasional lewd joke, she is genuinely not interested in that kind of Mature content. She also has an addiction to Bepis and her catchphrase it, quite literally, "REE" as she can be loud at times whilst tend to be overdramatic.

In a Galaxy far, far away--or, better yet, in the land down under of Australia, Fuyu was originally born to an Owl Demon Mother, who is a Nurse who heals the injured in the mortal realm and a Human Father of a long legacy being in the Military. In fact, her Father's side has such a long history in the Military, that eventually they became Nobles overtime due to their long and continued service for the country. Hence, why she owns the title of "Lady" in the first place.

Despite her Half Demon/Human status, she was born as a Shapeshifter that can switch from her original Polar Bear cub form to her Human form, where her ears become very plush like, yet they still work to listen. Her paws also become fingerless gloves, it's believed that the reason for their seemingly fake appearance is due to a natural camouflage she was born with, however the true reasons remains unknown. She currently resides in the Snowy Mountains in QLD Australia, occassionally teaming up and playing with members of Angst Inc. (a Team she is primarily in charge of, however, is still a WIP)

At the moment, she is with 2 Groups: VAC (Virtual Art Cafe) and Angsty Aussies, she collabs primarily with them at times but not always. Many have claimed that she is "Cute" or "Adorable" however, she is vehemently against those claims.