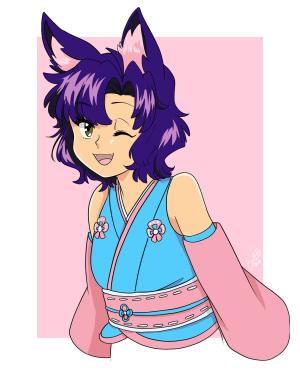 Tamako is a vstreamer who makes content in English and usually plays games like Minecraft and Muse Dash. She has played some RPG's and some puzzle platformers with more of that genre to come. Some of the RPG games have been games like Anondyne. She has said there will be some more rhythm games in the future as well.

In another dimension where kitsune are revered and live among humans, magic is all around and harnessed by the kitsune to protect the humans. Protection is needed as the world is under attack from an unknown enemy trying to steal the harmony between humans and kitsune and destroy the happiness in the world. We have established magical barriers protecting the cities that we defend, and I was assigned to one of them.

The barrier alarm was triggered one morning so I rushed out to see what had caused it only to find something completely different from anything we’ve ever faced before. I’m not the most experienced guardian and one of the youngest but I still will do what I can to defend the harmony and happiness of my city.

I rushed up to the barrier and pulled out my Incantlet to start casting my circle. I could see the runic symbols taking shape on the ground and in the air around the enemy and myself. This enemy was determined to get into my city and I wasn’t going to let them!!

As my circles appeared I saw something charging up over the enemy, some sort of energy source, they’ve figured out how to utilize magical energy as well now…this isn’t good. I quickly altered my circles to make my strongest attack to destroy them before they could launch this attack. As I finished my casting and launched my attack, they launched theirs as well and our attacks hit head on.

At first all I could see and hear was a deafening…nothing. Then I could see things coming into focus around me…but nothing looked familiar. There was no ground like it was ethereal. I’d heard about this in my training that there is some realm magic comes from but I didn’t think it was possible to actually reach it!

I stretched out my arms to try and grasp for anything as I could see more coming into form around me…but…this doesn’t look right…it looks like…a city? Why does the realm of magic look like a city?

Everything finally cleared up and I could hear all the sounds around me…it was definitely a city, but nothing like my city. There’s a lot more people and no barrier. They’re rushing around a lot more but at least they’re pretty technologically advanced.

I started to walk around and noticed that these humans seemed…content…but there’s little harmony or happiness. As I walked around more I also realized there are no other kitsune guardians. Is this world really unprotected? Is that why I was brought here?

I grabbed my Incantlet and realized I still had my magical abilities and decided that I, Tamako Henka, the only kitsune guardian to this world will try to find the harmony and happiness!