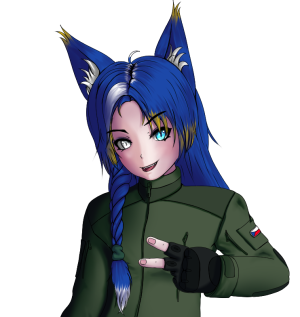 Martinus is a male, formerly human vtuber, who's life changed drastically after he was forcefully fused with a japanese fox spirit during a covert operation in Panama.

Hair: Long blue hair with yellow highlights around the tips and white highlights in certain areas. One braid, right side, front. Small blue ahoge on top with a white tip.

He is identified as a blue fox - human hybrid, as he posesses both animal and human ears.

After serving in the Army of the Czech Republic as a combat engineer, Martinus wanted a little more thrill to his life. He was known to be a dedicated soldier with strong leadership capabilities and proficiency in english language, however the Army did not give him an opportunity to make use of them. After contacting a certain old friend of his, a french lawyer and arms dealer by trade, he was offered a contract under a certain organization fighting for protection of humanity from anomalous threats.

It was during one of their missions when his squad got wiped out by an experimental weapon. Martinus was taken prisoner, tortured, interrogated. Eventually they used his body as a medium for paranormal experimentation. He was the only one to survive the new "weapon", and thus the best candidate.

This experimental weapon was in reality a summoned and imprisoned shard of the japanese goddess of sun, Amaterasu. After years of confinement she was furious, and when released on the battlefield she killed off the entire team of operators, which allowed her to calm down. After she came to her senses, only one man remained, beaten and in tears over the loss of his friends. She spared his life before they imprisoned her yet again. But she left a mark in his soul that sealed his fate.

After two months of experiments, the lead scientist was able to fuse Martinus's spirit with the fox. Drastic changes could be observed as his body was struggling to contain this power. His hair turned blue, his eyes changed colour too. Two fox ears grew on top of his head and a fox-like tail, connected to his spine, grew out as well. His height increased, his facial structure somewhat shifted and his nails got more durable.

Additionally a heightened sense of smell and the second pair of ears turned him into a formidable threat, as he was well versed in hand to hand combat even before the incident, but now he was a true predator able to effectively hunt and ambush humans. Not mentioning the pair of fangs that had grown out inside his mouth.

Still confused and partly in battle with his own body and the foreign presence inside his mind, Martinus managed to break out and disappear into the jungle. He hid on a cargo plane to Europe and started to plan his revenge.

It was approximately three months after he escaped, when he founded a PMC (Private Military Company) by the name of Aokishiro Security Solutions. Thanks to his abilities he managed to skillfully steal several shipments of military stock, and made a small fortune by selling it. This allowed him to buy an entire valley in the european alps. Here he laid groundwork for his future headquarters. And here he made himself a Captain.

Martinus currently commands the AKSS from the Hochwald Private Military Site. The complex is built very much the way SCP Foundation builds their sites, having an elaborate system of connected underground bases, located in clusters around the valley. Some of these are even dug into surrounding mountains, offering covered firing positions and magnificent views.

The complex and the valley are well defended.

The heterochromatic eyes are linked to Martin's real life injuries. He has wounded his right eye in the line of duty and doesn't see through it as clearly as through his other eye. The gray colour references this condition.

Golden linden tree leaf, used as the AKSS insignia, is a czech national symbol. It stands for youth vigor, friendship and good health.

Martinus is a nickname used by Martin ever since 2015, many close and real life friends call him by this nickname and he is used to it more than to his real name.