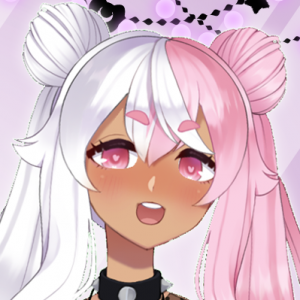 They will be celebrating their 6mo of Vtubing in December 2021, coinciding with their annual charity streaming event. Their content is available for viewership across platforms such as Twitch, TikTok, and YouTube.

SirenNyx is a Babaylon possessed by the celestial dragon spirit of Bakunawa. Once living as an exorcist assigned to the West, they were left culture-shocked in the mainland. Nyx loves and appreciates their fans, deeming the most loyal as true Baddies, and inviting the most powerful to join their Yakultists. As the possession by the dragon spirit continues to evolve, Nyx's appearance changes from time to time, finding themselves back and forth or in-between their dragon form by night, with the different phases of the moon.

Though, in a world without twilight, SirenNyx's currency deals in MoonDrops. Traditionally, a Babaylon serves as someone like a medium, the liason between worlds. So it's almost fitting that Nyx's affliction and affinity for the celestial dragon could put the greatest of demons down. Upon laying more spirits to rest, SirenNyx found themselves at the gates of hell: an internet café.

Thus began SirenNyx's fall into video games, which slowly evolved into content creation. Which has taken over their duties as an exorcist, with Nyx ideologies about a safe, righteous passing often infecting how they both see the world and see how spirits deserve rest. Their content lays in wholesome exploration of Dark Fantasy and Horror, shedding light on their affinity for the paranormal and demonology. And what better way to exorcize demons, than creating a safe-space for those who need it most?