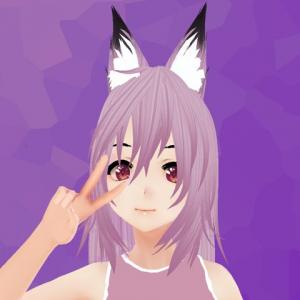 Shinobu Touryuu is a 20 y/o transwoman and spirit VTuber from the Netherlands. Her hobbies are streaming, singing, drawing, watching anime, reading manga and learning languages.

☆ The black magic slowly swallowed her up and turned her eyes and half of her hair purple. The reason why still the left half of her hair is green, is because of the hidden protective power inside of her four-leaf clover hair clip, which she got from her mom Seiichi Kikazawa (race: spirit) for her 1st birthday.

☆ Only years later after she turned 100, she became stronger, and enrolled at the best magic university the world has to offer, Majutsu University. But she's still corrupted by the dark magic, which also makes that she can only use light magic with her left side and only for short duration.

☆ On the age of 100, she also got crowned Queen of Dracohym, directly by her grandpa Kakunosuke Touryuu (race: dragon), because he didn't entrust the crown to her dad.

☆ Her twin sibling Misora Touryuu (race: demon), who also has become her girlfriend as they became more and more affectionate over time, helped her a lot, with getting stronger and freeing her from her dad, and now they're trying to make the best of things.

☆ They're trying to get even stronger, so they can participate in and win the Arcane Wars, the highest class mage tournament in all of existence, which takes place only once every 1000 years. And so they can free Shinobu from the darkness inside her.

☆ In the meantime Shinobu decided to study humans, and started streaming as a hobby, to kill time, and to get to know more about humans, who watch those streams.