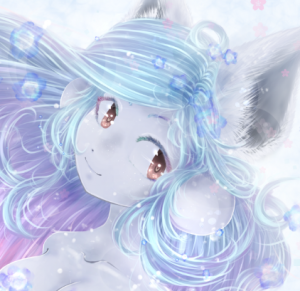 Serene is a Purisuunkian VTuber in SpectroV who speaks English but also supports her stream chat in Spanish, Japanese and Swedish. Her general Aesthetic is Crystals and attempts to keep her streams friendly for everyone. She primarily streams games in the RPG and Sandbox genre but may also play platformer and MMO genre games; among the genre of games she will not play is horror since as she says "Horror is too scary".

When it comes to the creatives she is a vocalist, remixer/producer, artist and animator. She may stream her working on these creatives and discuss these creatives while she streams often hinting at future projects. She takes commissions and often works on them during streams; occasionally she may also do art lesson streams with other VTubers drawing their characters with them. The program she uses for her art is Clip Studio Paint EX and for her producing and recording of music she uses FL Studio.

When it comes to the community she is the founding member of SpectroV; a VTubing group based around the spectrum of aesthetics and people the group has. Alongside SpectroV she also has her own server labeled as "Musical Cucumbers" where she hosts events where she plays games and interacts with the people who support her. On her server she often hosts art events where she gives out small prices for the ranking of participants; in return she often gets art made of her which is used to promote the artists who participated.

Another thing that plays a heavy influence on her work is anime, she has in quote "watched over 100 titles" with her favorite titles being ノラガミ(Noragami), 地縛少年花子くん(Jibaku Shonen Hanako-Kun) and Banana Fish. The anime she watches is a common topic that she discusses in her streams on the side and may dominate entire discussions she has during the games alongside the fact that she often uses anime music box openings and endings as background music. She is also a huge fan of Vocaloid music as she speaks about it and does work with Vocaloid on he YouTube.