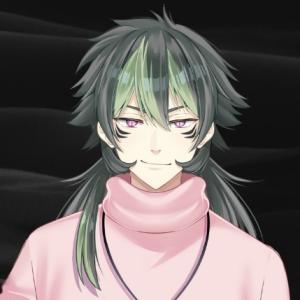 Serakuga is a VTuber who is a free spirited photography enthusiast.

Serakuga, was abandoned at birth while growing up having a very strange set of eyes. Looking back Serakuga had always cursed his biological parents for the eyes he had, but has come to understand the significance through all of his hardships. He saw life in a different light unlike the rest, unearthing a budding talent in photography gave him a chance to shine. Along his travels, he found himself finding a hurt and malnourished marbled fox in his usual nature shoots within the Banff Park. With the mother nowhere in sight, Serakuga saw his past within this little creature and gave it a chance to thrive along side him. Both of them sharing similar hair and eye color they somehow understood each other in a single gaze of the eye, in what would become Raku's best pal Damon. Currently, Raku and Damon are incredible life friends making each other have a brighter day making sure they are leaving behind their lonely past.

Serakuga's eyes were given to him at birth by his Numereji (Rainbow Serpent) kin. These eyes perceive life in a 5th dimensional state. The eyes are also linked to his guardian which in turn provides Serakuga with a supernatural instinct and perception.