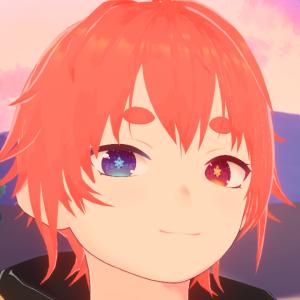 Hatsuyuki Kiiroku is an English speaking VTuber that does chatting streams and occasionally posts artworks onto his pixiv page. He is also a graphic designer that creates his own overlays, banners, and thumbnails.

Hatsuyuki Kiiroku is a powerful ice magic user. A prodigy as a child, Hatsuyuki Kiiroku graduated from the Magic Academy at the young age of 15, years earlier than expected from other students. He joined the Royal Militia a year after his graduation.

One night, Hatsuyuki was assigned to take down a rampaging Rain Goddess. He did not stand a chance against her. He summoned a portal that would send him to another world as a final escape plan, but he did not expect the angry Goddess to chase after him.

Upon arriving in the new world, he noticed that his body felt different from usual, and he was unable to use magic. After checking his reflection on a puddle he found out that he swapped bodies with the Goddess. They both called off their fight so they could address the situation properly. Both the Goddess and Hatsuyuki found themselves living in the same apartment, living off of the little money they both made. Hatsuyuki tried to make money by streaming with the Goddess' body as an attempt to draw viewers in, as strange as it was, the Goddess did not disagree with the idea.

About a year later, they were finally able to fix the problem with their swapped bodies, but neither wanted to go back to their original world. Hatsuyuki wanted to continue streaming but with his own body this time. Both are now peacefully living together with Hatsuyuki now being a streamer rather than a powerful ice mage.