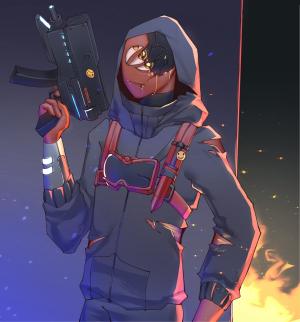 Sanguine is a male android that makes content in English. He is a variety streamer that is largely informal and casual in nature, and enjoys interacting with his viewers when possible.

Despite knowing only English, Sanguine enjoys interacting with non-English-speaking VTubers whenever possible.

An experimental 4th generation, Dainath android created by Synapse Corporation and residing within the planet-sized Evaniscole Space Station in the 23rd century. Originally working as a mercenary for IDOL Corporation to retrieve data on 21st century VTubers for their entertainment androids.

Sanguine himself has decided to take up VTubing, streaming back in time to the 21st century through the use of enigmatic FUTURE SCIENCE. When he's not VTubing, Sanguine takes on mercenary work throughout the galaxy as needed. His roommate and "sister", Cerise, works for Evaniscole Station Security and has a side interest in becoming a chef.

Sanguine heavily dislikes spicy foods, and has an oddly specific, irrational fear of the cryptid Bigfoot.

Cerise rarely makes appearances on Sanguine's streams, as she's usually off doing her own things. A few of Cerise's hobbies are model making, cooking, reading, watching movies, and space tourism.

Overall, Sanguine and Cerise are very similar in personalities. Cerise arguably has the more level head of the two.