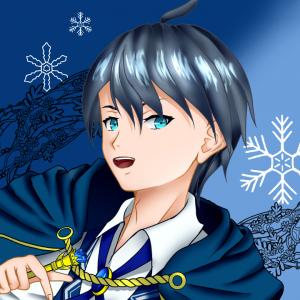 Rayne Fujita is a Filipino Virtual YouTuber, Streamer, and Artist. He is known as the "Ice Wizard" He streams in either English, Filipino, and an understandable Japanese. He do art streams on Twitch, while he generally doing live games, and Self-Study Nihonggo on Youtube.

Rayne is an adopted child of Fujita, The Greatest Ice Wizard in The North. The Ice Wizard Named him "Rayne" for he is an abundant blessing from above. The Wizard enjoyed having Rayne. They play house games, and he teaches him Art that he can present to the whole world. The Wizard even teaches him Three Languages: English, Filipino, and they just started learning Japanese. Life in the Fujita Household is fun for him.

Rayne woke up alone, without the Ice Wizard at the house. He was thinking at that time that he was on an expedition. He thought of that for almost a while. Sadly, The Master never came back. He waited for so long, even staring at the window in the middle of a Winter Storm, he never came back. Life has been sad for him as time passed by. Few months later, he was trained to be an Ice Wizard. One goal for him to be an Ice Wizard is to look for his Shisshou whom he missed dearly, and follow his footsteps to be one.

After his training, Rayne comes back to the things he loved - books. He still loves reading stories on Alchemy (known to Earth as Chemistry), Magic (Fantasy), and Glamour (Romance). Rayne is also training his vocal ability, singing some songs he loves, particularly Japanese songs. This will, according to his instructors during his training, enhance his ice abilities.

One time while Rayne was cleaning the house he noticed a room that he never went to. He reminds himself of his Master that he cannot enter the room without the Ice Wizard acknowledging him as one. Out of curiosity, he approached that door. He saw a letter stuck at its side. The letter says: "You can open this door once you’ve done the training." He then opened the letter he obtained. Inside is a massive library. The letter stated that the Master recognized Rayne of his full potential as an Ice Wizard and he can enter the room. However: nevermind, He was mesmerized by the nature he was in - a place full of books he can read the whole day. While exploring the place, he noticed something: a table with a strange box with some wires connected from the back, and a strange mirror. The people on Earth called it a PC.

The letter instructed him on what to do with these. Shisshou even mentioned in the letter he left a while ago that he will see him in that mirror; that he is watching me progressing to be innovative, and be a good servant to the Ice Goddess.

And that is how Rayne Fujita, the Ice Wizard, went into the Websites called Youtube, and Twitch, and became a Streamer/Vtuber himself.