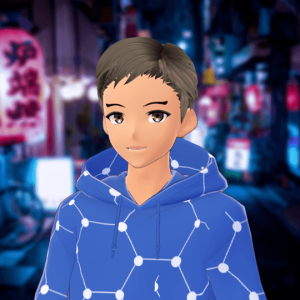 Masaharu Hoshikawa, codename "Phosphate" is a variety VTuber/VStreamer who makes content in English or Filipino. He usually does "Karaoke Streams" and "Variety Game Streams"

Masaharu Hoshikawa || KAN: 星川正治 || is your typical, 21-year-old college student, interested in the sciences, as well as giving himself time to keep active by working out, singing, and sometimes dancing whenever he is free.

One unsuspecting night, while Masaharu was enjoying his leisure alone in his room, a sudden glow from the floor caught his attention. Luminous lines and rune-like symbols appeared directly below him, getting brighter and brighter by the second until he had to cover his eyes to avoid the blinding light. Once the light dimmed enough for him to open his eyes again, he was in a completely different place.

This new place looked like a throne room, and the tall, stained-glass windows showed daylight outside. Several people who looked like medieval palace guards lined at the walls, with a kingdom's banners hanging at intervals with the windows. In front of him was a throne with it's seat and back rest made with dark velveteen cloth and lined with gold. Right in front of that pristine throne was one man with a red coat and a gold crown embedded with rubies. Little did Masaharu knew, this moment was the start of his new life in an outlandish world ...for the meantime, at least.

He didn't give the King his real name, as he intends to keep cautious while he resides in this world, he told the people call him "Phosphate." The people in this new world still cannot seem to comprehend if he is a being with magical capabilities or not, and the king regarded him closely, wondering if Phosphate's two different-colored eyes was a sign of propensity for magic, when really they are just colored contact lens that he didn't take off yet.

Despite being pulled into a new world more-or-less unceremoniously, Phosphate was able to make friends with a couple of other personalities that are also situated here and has decided to stream himself playing video games to make a living during his stay. After all, being a busy college student hasn't really gave him much leeway for video games, so he might as well enjoy his time here until he figures out how to go back home.