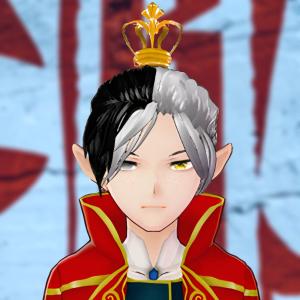 Lord Viktor Sintrophious Syntrophy of Viktopia is a Filipino/English Streamer on Youtube. Upon discovering the art of streaming he decided to show that he can be a casual variety streamer to his citizens. He has a looming fear for horror and gets really agitated with things that don't sit right with him. He loves to banter with the other members of his Court of Nobles and has the occasional braincell malfunction due to years of isolation.

Within the unknowing depths of the endless halls and passages underneath the grand stone castles of the old kingdom was 2 beggars a brother and a sister of elvish descent. The kings of old tried to take one but was met with fierce resistance from the other and so took both into their care. Powerful magicks were given to one while the other given his frail and weak form was given instead wealth, a fake crown and people that could service him. Why? You may say but even the siblings do not know why.

Years have past and the siblings grew to become respected and known throughout the other kingdoms but tis was true for one sibling, the other silently continued his pretend rule over the kingdom. Then it happened, the sister warped a powerful magick that broke the fragments of reality within the kingdom, tis was an accident but it was too late now the world was breaking apart but even with how little the brother's magicks were he pulled out a large mirror with the aid of his familar a large furry beast and sealed away the magick and his sister into the mirror but of course it came with a price for him as well, for his entire body was now permanently linked to his sister, his very own twin sister and thus despite not swapping souls they swap in form a third of a year as a symbol of what happened that day that reality has thus remained broken for the both of them. They saved protected the world from the calamity that they brought but it separated them permanently and the magicks keep them from dying of age until they unite once more.

A few hundred years later Lord Viktor Syntrophy of the old kingdom is the only one left and the old kings have died which makes him the true ruler of what is now known as Viktopia.