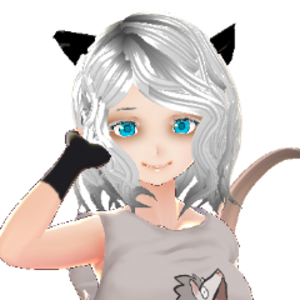 OutermostGhost is a Vtuber and Vstreamer with a ghost/opossum model. She streams a variety of games on Twitch and runs an archive channel on YouTube.

Legend has it that shortly after the opossum that spawned the ghost died, it entered the body of a young girl in an East Texas city. Over time, the girl and ghost bound and became on.

Now, as the girl has grown, the entity known as OutermostGhost (she prefers 'Ghostie' or [REDACTED]) has decided her flesh body is much too confining and has chosen to give a form to her personality in a digital sense. Now her influence may be spread.

At some point, she became involved with a Canadian bear called Goji and the two swiftly married, moving to the cold North, in the land the ISPs forgot, a place mentioned in a Clive Barker story that he likely never visited. They are building a house that has DOORS and WINDOWS, which, Ghostie has been told, are a sign of opulence.

Still attempting necromancy on her plastic skeletons, she is sometimes discouraged by her lack of progress. Also, she's extremely shy. Very, very shy. Any compliments may result in blushes and an attempt to hide in a box.