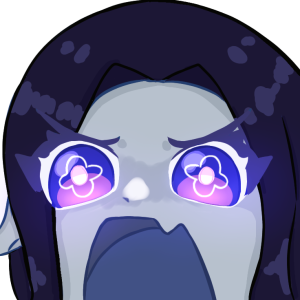 Nox is an english speaking vtuber that loves talking and interacting with others! they go by they/them pronouns, they also draw sometimes but they usually play games and talk to other streamers, their targetted audience is 13+. Noxie has limited access to streaming equipment so they also stream on mobile sometimes!

A jellyfish that witnessed the destruction of earth that happened in an era so old not even the galaxy recalls it but magically survived after accidentally consuming a star, before it noticed what had fused with it's body it was sucked into a strange light that made it go to sleep for thousands of light years when it finally awoke it found it's whole body in a completely different form..." its this a human? a female? no..the skin is weird..p-pointed ears? wha..WHATS GOING ON?!?!" amidst it's confusion it almost missed the whole world, it was completely different..there were tall buildings everywhere with strange devices scattered across, weird square things running at a monstrous speed, loud crowds, people wearing weird things.. "wait are those even people?" the world had completely changed, it knew it was in a pinch.."this is not the world i know..." indeed it wasn't the same world, the 'earth' it belonged to was long gone..this was an earth from a parallel universe, the world that the current mortals live in. What will this jellyfish ahem former jellyfish..do next? it discovers social media?! "this is the safest way to gain information about this world...!! im not doing this because im interested..yea.." oh no it also discovered fantasy anime..this isn't good.. "No way..i never knew magic existed.." it..it discovered STREAMING?!?! "im scared...but this is the safest way to interact with the humans..t-there was a thing called vtubing right? they'll probably never know!" they shakily click on the flashy "GO LIVE" button. Will you be their next human?