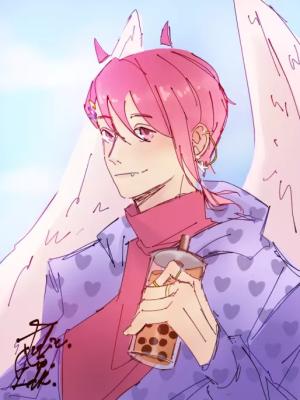 Nayuto is a new VTuber who currently streams on Twitch. He loves listening to Kpop, dancing, singing, and laughing with his chat. He usually plays a lot of Stardew Valley and Valorant, but is open to moving onto new games. Games that he has been looking forward to includes Minecraft Java, Terraria, and more.

In a world where angels and demons have faded away, a young boy grew up loving music and its power to move people. His eyes would shimmer, and his heart would flourish with excitement. Nayu, short for Nayuto, grew up aspiring to become an idol. He trained every day and night dancing, singing, and doing anything he could, to reach his dreams. One day, a company gave him the opportunity to have his dreams come true. That day, would live on as the day his life changed. In the middle of his debut performance, Nayuto's soul was entranced with an unbelievable light and darkness. He transformed, sprouting one angel wing and one devil wing. A halo and two horns were seen above his head. His eyes, light blue and dark red. Now flying above the stage, he sings and dances, within the light and darkness. After Nayuto's debut, three spirit soul idols come to him one by one in the shape following, a cat, a dog, and a panda. They each correspond with one counter part of his new self. The cat, an angel, the dog, a devil, and the panda, both. He transforms with his new soul counterparts to achieve his Archangel Star Idol Form, Archdemon Moon Idol form, and Archaic Moonstar Idol form.