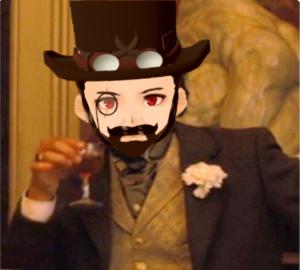 Nanosnaker is a Steampunk Virtual Streamer who mainly streams in English. He streams video games, 3D art and Just Chatting. He calls his viewers Banana Legionaries and he makes lame jokes.

After a successful revolution against the controlling power over his country, Nanosnaker destroyed the democratic system and formed his own monarchical system called The Banano Empire. Now he rules over a vast territory with an iron fist, but to fuel the war machine of the Empire he need a new type of resource. Over the years he discovered that he can harvest and transform other people's feeling of being entertained into a powerful fuel source, thus targeting our dimension and providing entertainment for the humans.