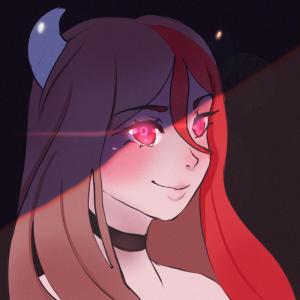 Ann is a female Virtual Streamer who makes content in English. She streams variety games." but is also the person who started the Hunger Game of Vtuber trend back in November 2020.

Her community loves " bullying " her (in a playful manner ) by creating memes about her.

(Ann) used to do a shit job in hell as a lesser demon, nothing fun happening, no torturing, no messing with humans, nothing. She wasn't born in the higher demon classes so she never had a chance to learn about her powers as a demon or how to toy with humans, She did learn that she was able to sneak out to watch the milky way in the human realm, their sky is pretty compared to the demon's. One night though, her higher ups noticed she went missing and looked for her, she ended up being found and got banned from Hell. That's how she got her white horn, a sign that she's not recognised as a full fledge demon anymore ( even if she was just a lesser one before..) She can't hide her horns which makes it difficult for her to blend into the human world, plus, she doesn't know much about it since no one ever took the time to teach a lower demon about the human realm. She wandered aimlessly for a while and ended up hiding in a back alley. Someone approached her, they didn't get scared so she was surprised. It was halloween night, most people were disguised anyway, the person was kind and showed her around wondering why this girl was all alone he asked questions to which she answered the best she could. he asked her name " I don't have one. " the man got a bit surprised and asked if she wanted one, she said yes, he gave her the first name he could think off that sounded fitting, "Ann", When it was time to part ways she stood there and watched him go, as he walked away her belly grumbled and the man laughed asking if she was hungry, ann nodded shyly and the man got her some treats, ann was amazed at how good human food was even if it gave her a belly ache. He asked if she had somewhere to stay to which she replied by the negative, he said he could phone a friend that could house her but she refused saying she only trusted Him. They ended up at his place and Ann asked him to sign a contract with her, thinking she was kidding, he signed right away, but something weird happened he saw some chains float around and felt his wrist tighten. "You're my human now!" said Ann. [...] The man, confused asked for explanations, as Ann explained everything he felt very lost but though to himself " welp it's not like i have a choice anymore" Ann ended up falling for that human that had to teach her the human ways and couldn't express it, they keep teasing each others and giggling together which she thinks is.. convienient ! Plus, she still gets to stargaze !