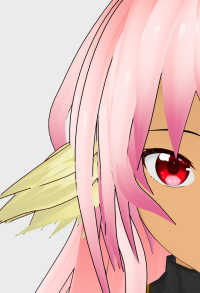 They are an agender VStreamer that began creating content in April. They are known for their welcoming, chill vibe in the streams and welcomes everyone who is looking for a safe place to relax and chat with a down-to-earth streamer. Their usual stream hours are between 5PM and 8PM EST, but that is subject to change depending on circumstances.

The games that they play are usually older games that they already have played, own or have owned, or have been meaning to complete it but never got around to it. There are occasional newer or more well-known games that are played. They also take requests from their viewers.

Nana is known as the Overlord of ((The Void)), which is place that does not exist in space or time. It is a reality that can shape and bend to the will of the Overlord, with limitations. This concept is still new to Nana, as they were recently appointed this position. They are also known as the youngest Overlord, being only 10,000 years old.

Recently, Nana found out ((The Void)) is shrinking, and no one that lives in it knows why. Nana believes it has something to do with Voidlings leaving their home and traveling to a place called Earth. As more Voidlings leave, their realities and energies that make up a part of ((The Void)) gets absorbed back into the Universe. As the Universe grows, ((The Void)) shrinks. Nana hopes there is a way to allows both realities to co-exist. The previous Overlord, the father of Nana, has implored them to not investigate the problem and let it work itself out. Wanting to be the best Overlord they can, they travel to Earth, anyway.

While researching Earthlings, Nana learned they like to be called humans. They wanted to blend in to the population as much as possible, so Nana decided to take on a humanoid shape while maintaining some of their original features. They also discovered there are many humans that enjoy playing these things, called video games, and play them for other people to watch on an internet. Nana wanted to see if this was an easy way to find the missing Voidlings while maybe recruiting a few extra to take back to ((The Void)). However, Nana has found playing games is a lot of fun and has not tended to the shrinking Void in about 2 decades. Firstly, because of the video games. Secondly, because of this streaming phenomenon that has engulfed Nana's life during this time.

Currently distracted, Nana is somewhat trying to solve the shrinking Void problem while enjoying video games and other earthling content with the beings that live there.