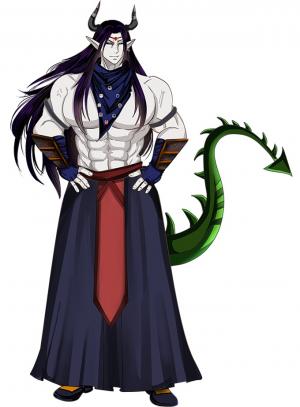 Kojiro Kaelus is a male Vtuber who streams a variety of games and content on Twitch and YouTube. Despite his muscular build and size (And the fact that he has some weightlifting redeems on his channel), his content is not focused on fitness/weightlifting. Rather, he likes "Retro Games/RPGs/Platformers, Minecraft , Indie games, and sometimes, music". One of his catchphrases is "Sit back and relax. Kick your feet up, take a load off." His style as a streamer is generally very relaxed and laid-back.

Kojiro is also a composer, musician, and voice actor. He fairly often streams flute music as well as music production. Occasionally, he'll stream Voice over improv and practice. Despite possessing a rather nice singing voice and admitting his ability to sing on-stream (including having recorded for a few songs), Kojiro insists he's "Not a singer". He has a very deep speaking voice.

An island dragon from the ancient island nation of "Fari". His people served the desert kingdom of Elysia for generations until the most recent queen betrayed the Fari, nearly wiping them out, man and beast alike. Kojiro was one of their best warriors, fighting alongside his people, both human and nonhuman. The queen, having revealed herself as a powerful dark sorceress, killed and forcibly reanimated a brother in arms, turning him into a dark fire spirit. The sorceress scattered the handful of survivors (including a young Kojiro and his family) across the world and across time.

Kojiro found himself living in today's day and age, with today's technologies and conveniences. Many things were new for him, but over some 60 short years, his family has adjusted well.

It was revealed that Kojiro is a "Dark Flame Dragon" and is capable of breathing fire. Kojiro owns and is the main boss of the level 5 dungeon "Dragon Pearl Caverns". His home is located inside the dungeon. (The dungeon was named after the island in which it sits). Despite this, he lives peacefully among the handful of villages on the island. Foolish adventurers who dare to challenge Dragon Pearl Caverns rarely return and the villages have a "spooky legend" to keep marauders away.

It's been speculated that Kojiro has a beastly dragon form and will involuntarily transform should he ever lose his circlet.