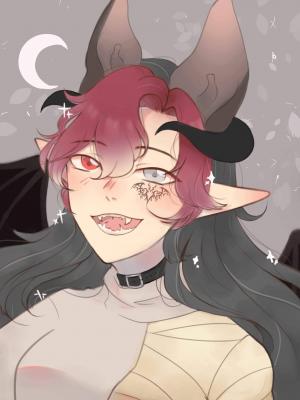 Chiro is an English/Filipino VTuber/VStreamer who streams her favorite role-playing, story-based, and indie games. Some of their favorite games are Genshin Impact and Life Is Strange. She also likes to do occasional chill and just chatting streams that range from covering broad topics to just straight-up chilling with the cavebats. Fun fact: Chiro is actually a writer/poet! The bat-human hybrid uses any pronouns, though she identifies as female, is LGBTQ+ friendly, and can sometimes be NSFW (very seiso). Chiro is constantly trying to improve their streaming quality with what equipment they have!

In Kokong av stål; a realm where the growth of half-blood bats are continuously progressing, covens inlaid with occult magic have also started to form; and with it, comes the Coven Hierarchy; the true rank of power — the testament to one's reputable ability to conjure magic.

The Myskia Coven is sat at the top of this hierarchy. Composed of half-blood bats with human-like features, no one else in the cauldron of bats could ever overcome their power. Though during one stormy night, as the sky wept asunder, a certain bat was born. A daughter of lightning and thunder, comes the chosen of the Myskia Coven.

Myskia Chiro could transform from her human-like form to a bat on command. This ability came with its benefits, whether it be on instances of spying, or conjuring forms of magic that have never been conjured by any half-blood bat before. Myskia Chiro was the new pearl of the Myskia Coven — the bat mentioned in all the prophecies. However, amidst all the expectations laid upon them, she chooses to walk among the chains as she goes against her family and continuously refuse to conjure magic for the sake of the Coven Hierarchy. It's not that the young bat is not interested in witchraft, it's simply the fact that she would rather use it through other means; by learning more about the magic in her realm, by exploring its true nature, its origins, and capabilities.

Thus, she went on a hunt for the greatest wizard bat in ancient wizardry. The bat who knows how to conjure magic for its rightful use; Fladdermaus. During her journey, they discovered the act of streaming, and have finally found joy in their life amidst her family's suffocating restrictions. Along with this, he has also uncovered a talent for poetry, as she records her emotions and feelings throughout their journey, including what she feels as a part of the strict and suffocating Myskia Coven. In order to avoid disputes, she uses the pen name "angustiaelle."

Chiro dreams that someday, when her journey comes to a crescendo, she hopes that she can put an end to the unjust use of magic and the toxic competitiveness of the Coven Hierarchy, too.

But until then, they will be streaming ^•ﻌ•^

With her eyes peeled for Fladdermaus, of course!