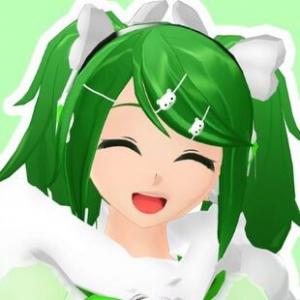 Midori was a female Virtual Youtuber who used to create contents in English. She was Canadian, as well as an android/A.I. She was formerly known as a fanloid, in reference to the fanmade vocaloid Midori Hatsune. Her age was 22, her birthday was March 12th, and her height was 152 cms (5'0"). In terms of personality, she was very curious and bubbly. Since she grew up isolated from others, she tended to ask a lot of small questions about things work. She was also gullible and not always the best with social cues, which would lead to her not knowing whether she could trust others. She was also a slow learner, having to have things explained slowly or repeated to her. In terms of appearance, she had short pigtails tied up with smaller white bows, her bangs were clipped up to the side of her face and forehead, she wore a long black and green scarf, she wore a white dress with a green outline filled with black musical notes, she had white knee high socks, she had black boots that had green soles, she had headphones, she had heart shaped emerald earrings, and she wore a green and black chain around her right thigh with a white bow tied to it.