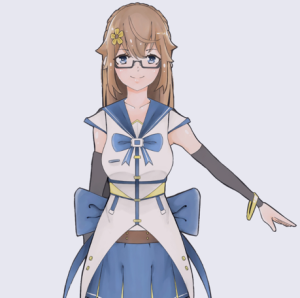 Mia Hana is an English-speaking VStreamer who streams on Twitch. Her character design is based on a female Japanese school uniform, with a blue and white color scheme. Her personality is Tsundere in which she is tough on her fans at first, but slowly opens up to them.

An angel stared down at a hopeless world filled with anger and despair, hating part of herself for being unable to change it. Mia felt that humanity should be happy and full of joy, but where did the light go? She left heaven hoping to find her answer. The world was cruel, cold, and unforgiving. She had nearly given up hope of finding some way to bring back joy until something caught her interest. A spark of light had caught her eye and another coming from a stadium filled with glowsticks waving to the beat of music--people. An idol had found a way to spread light and positivity just like the angel desperately wanted to, yet the angel knew she could not remain in this dark world for long. She sealed away her angel powers and remained on Earth. Years passed; Mia Hana forgot all about being an angel. She became an otaku, Passionate about wanting to sing on stage, she was performing on the street when the “founding fathers” discovered Mia and gave her a chance to live out her dream.