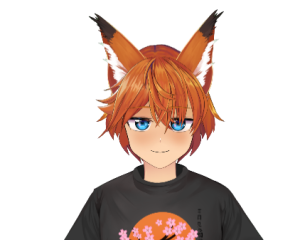 Marcus is simply put the "Agent of Chaos". He is a Cat Fox well known for his energy that knows nearly no bounds and has a personal goal and vision of "Turning your frown upside down" He is primarily a Sim Game player who plays games such as War Thunder primarily but has been seen playing other games like Star Trek Online and on occasion Single player titles. While he is a sleepy potato at times he is generally good natured. Always willing to give as much support as needed and puts his friends above himself. He also sees his community as a tightly knit friend group and runs with the "Kitsuzens" On missions in War Thunder or whichever game that is applicable.

He primarily streams with a PC and has no known consoles. He also occasionally does Karaoke and has a strong interest for singing, Gunpla (Even does streams of himself building Gunpla) and a massive Star Trek Nerd. He also makes Horrible puns that make just about anyone groan and can be on occasion very NSFW. He also tends to be called a Cat by his community due to his propensity to go Nya! when he is a cat fox much to his chagrin

A resident of the Kitsu Isles! a country in a alternate dimension he unfortunately became trapped on earth during one of his experiments involving a quantum displacement drive which transported him to a alternate reality.

He now finds himself in the unfamiliar world of earth in a sunny little island country known as Singapore. He now seeks to make a home in this world that is now his own and to make friends from all over the world!