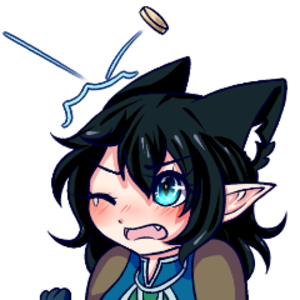 Kat is a female Elf-Fox Arcane Rogue VTuber who loves to play a variety of games - including horror, FPS and RPGs! She enjoys to collab with others, however she usually streams solo more than she does with another person. She streams on PS5 and PC, playing an assortment of games from there and is always looking for more people to play with!

Kat usually streams evenings Monday, Wednesday, Friday (usually around 7:30pm EST), but sometimes will also stream other days as well or have afternoon/morning streams. She has been streaming for the past 6 years and originally was a no facecam streamer until she turned to VTubing. Kat also is a twitch affiliate, having been one since November 2020 and has been passively striving for twitch partner since then.

A fox that was turned humanoid by the sorcerer of an enchanted forest due to wanting an apprentice. Kat, still trying to adjust to her new form, had accepted the sorcerer's offer and thus became his student in the art of magic. She of course doesn't always use this magic for good, instead using it to make stealing gold and other valuables a lot easier for her on top of protecting those she cares about most. One day, something happened to the sorcerer and she discovered that he was the protector of the enchanted forest and without one, the forest would be at risk of being harmed. In an effort to make him proud, she took up the role of the new guardian alongside her normal Rogue role. With her being the new Protector, Kat is now able to use her magic as well as the skills she picked up along the way to protect the inhabitants of the enchanted forest - both mythological and not. This of course doesn't prevent her from being her normal mischievous self along the way too.