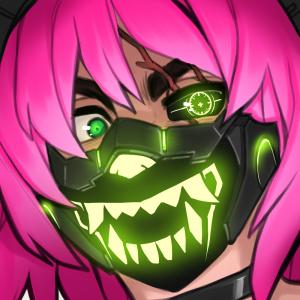 Karadrine is a VStreamer who occasionally posts shorter videos on YouTube. She often streams first person shooter games, but can be considered a variety streamer as she hops between genres whenever there's something she wants to play and enjoy with her viewers.

Karadrine is one of the "successful" products of a long-abandoned, secretive super-soldier development project codenamed Legion. Without a Legion handler present to activate them, most subjects of Project:Legion live regular lives without ever realizing the extent of their training. In Karadrine's case, she was automatically activated through the Mnemosyne Protocol, an emergency neural subroutine designed to activate a Legion asset in order to protect them in circumstances of exigent duress.

Immediately prior to activation, Karadrine was hit by a fragmentation device, leaving excessive scarring on the left side of her face, and blinding her left eye. Escaping with her life, and a newly discovered set of deadly proficiency with weapons and combat, she took on a life of mercenary work. This would eventually lead to building a rapport with a Biohacker, who would later replace her left eye with a custom-made cybernetic implant.

Initial tests of the implant's capabilities showed an 80% functionality return. Subsequently, the modifications to the implant triggered another sub-protocol of Project:Legion, designed to link with a cyberbrain implant to increase hand-eye coordination to superhuman levels and allow for thermal and night optics. Being an early test subject, Karadrine did not have the cyberbrain implant, thus only giving her the capability to activate thermal or night optics through the use of her new cybernetic eye.

Extensive use of her left eye proves to be a difficulty, giving her crippling migraines and often resulting in muscle spasms in her limbs. These negative effects appear to be from neural overflow due to the incompatible nature of the modifications to her brain from Project:Legion, and the custom-made implant. In essence, it is akin to her optic nerves trying to read and interpret data that the eye is unable to transmit.

Being hunted down by the corporation now holding the remnants of Project:Legion, Karadrine found herself without a means to an end - unwilling to give up her life to be dissected and studied and, alone, unable to put an end to those pursuing her. With the help of her closest comrades, she found a way to put her physical body under cryostasis, and upload her consciousness to the Net.

She now spends her time seeking out other subjects of Project:Legion, and welcoming them to Elysium, her safe-haven and fortress. Those willing to join her cause are considered members of the Parabellum Division.