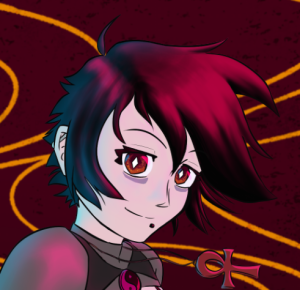 Swoon is a female VTuber who makes content in English. Swoon is a variety streamer, often found playing games, doing various voices, and being creative on stream.

She is a welcoming yet sassy goth who fuels herself with coffee and the occasional hot sake. The taijitu displayed on her brooch and as her subscriber badge on Twitch represents her ideals for keeping all aspects of life balanced. Her vast knowledge of the Elder Gods and the Eldritch has given her a particular 'interest' in tentacles. This knowledge also brings with it the brief episodes that blur the lines between genius and madness.

She loves metroidvanias and enjoys the challenge of souls-like games. Will put her own spin/backstory on characters in games. And Swoon takes great care in the characters and stories she creates and writes.

Though she doesn't admit it, Swoon is a soft hearted VTuber who works with her community to overcome differences to make her little corner of the VTubing space a diverse and welcoming one.

From many years of studying, storytelling, and reading eldritch texts, Swoon's imagination has manifested into a physical form named Phage. As creativity ceases to flow from Swoon and Phage new entities, stories, and characters spawn within the Swooniverse all the time.

To maintain her sanity from all of the eldritch things she has witnessed, working out and exercise has helped maintain her sanity, and given her abs of the likes that are rare among the vast population of female VTubers. The side effect is a constant hunger. Thus "The Swooniverse consumes all." And maybe she's become a little eldritch herself.

Phage was created between 2008-2010 as a sidekick. It would be 2016 when the conception of Phage would receive her finishing touches during a Biology college course and learning more about phagocytes and bacteriophages. Through different stages of depression Phage has been various shades of greys and blues, until Swoon's depression was fully worked through in 2018, reflected by the bubblegum pink color. The bandaid on Phage simultaneously represents the self inflicted mental abuse/destruction of many of her own works of fiction and the containment of a vivid and overflowing imagination. When the bandaid comes off, Phage and Swoon are fully in sync creating like they're running out of time. True to Phage's name, in the Swooniverse her and Swoon work together to end/consume nightmares and rework them through fiction.

Octiel is one of the original tentacled eldritch characters to have been born from the Swooniverse. She is short tempered but very curious, and loves to wrap people up in her tentacles. First washed up on the shores of California the baby C'thulhu devoured the first thing it encountered, using the shape and skeleton of the woman, Octiel formed into a more humanoid being and has been living with humans since, enjoying and loathing various aspects of the race.

Elegant Sea Urchin is one of the most fleshed out stories released by Swoon. Faebl Nox casts her life over the waves. Hear witness to her love of a perfect after lunch violet shimmer time, unrest within a tendril gripped society, respect for doorball, and strange run-ins with the fractured magenta dimensions. "Hear. Bask until the smogs roll in."

Tsuki, originally conceived as Truck-kun, is a shapeshifting eldritch waifu out of the concept where hugs are deadly and sends the souls of her victems to other worlds to defeat demon lords. She was found and named by Mercy, a truck driver who is a little rought around the edges. Since finding the eldritch isekai'er Mercy has grown attatched to the plight and sorry of Tsuki, who always ends the life of the people she loves.

LichThot is the code name of an eldritch being from a dark cold corner of the Swooniverse. She protects her phylactery with ancient spells and runes to preserve herself as an all powerful Elder Lich. Her story has only just begun on Earth, but she fuels her coffers with the power humans place in 'money' by 'simp' donations rather than her old way-'reaping souls straight from living beings with her tendrils.'

There are new eldritch beings popping up to prominence as of late. Brain-chan, an eldritch magical girl that has made one brief appearance, and not since been witnessed. An eldritch witch known only as Gidget has a hat with many eyes, and even more on her body. There is also a demon, known as Chiv the Sol Frayer. The intentions of these new Elder Things are unknown, and should be observed with utmost caution.

The Swooniverse itself is a void with the magenta remains of many other verses that have been amalgamated within. It is not malevolent, but not always kind; the Swooniverse consumes all.