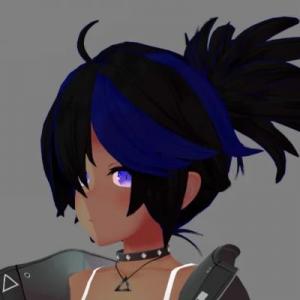 Leah is a Trans Female English VStreamer from Vancouver BC Canada focused on variety content with a mix of solo and group based comedy mixed in. She streams Tuesdays to Saturdays at 1pm PST (2pm if she slept in) to 9pm PST (Weeknights) or 2am PST (Weekends)

She's rude, crude, and has a bit of an attitude! Leah's an eccentric Canadian with quite a personality. Not afraid to dish out "Tough Love" to those she is close too chances are the more she swears at someone the more she loves them. While on the surface Leah can come off as Combative, Cold Hearted, Short Fused, and generally Uncaring she does her best to be there for her friends and family. She's Loyal, Protective, and as previously stated dishes out Tough Love like no tomorrow.

Leah's no stranger to Mental Illnesses and will openly talk about what it's like to have them if asked. She has Asperger's (A Form of Autism on the higher functioning side of the spectrum) ADHD, Severe Anxiety, and a case of Mild PTSD.

Leah's fairly young, She is about to turn 20 this March, choosing to abandon the thought of Post Secondary Education right after Graduation and chase her dreams as a young and budding Streamer. Her Family was apprehensive at first but as time went on and she built her community more her family has warmed up to her choice of career and cheers her on! It's not uncommon to see her mom Lazer_Snake and her dad Coolv1bes in the chat providing moral support, making sure she's well hydrated, and making sure she's sitting properly.

She has a soft spot for, in her opinion, the most underrated console of all time The Sega Dreamcast; She could talk about games like Sonic Adventure, Crazy Taxi, and Phantasy Star Online for hours (And has done so on stream on several occasions) She's into watching anime however doesn't make a lot of time to watch it since she's busy with her Stream. Leah will listen to pretty much any music as long as it isn't Country and she is currently infatuated with Mashups from artists like Triple-Q and PluffaDuff.

Leah's down to try anything she can get her hands and it wont be uncommon for her to switch between VR, Console, and standard PC content on the Stream.