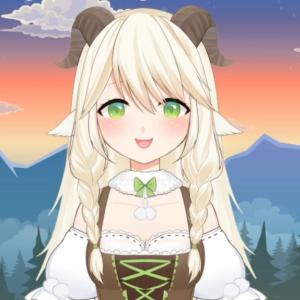 Inislein, or short Inis, is a comfy Sheeptuber from Germany, that does a variety of content! Wether she draws gorgeous art or plays exciting games, there is always fun to be had when watching her streams! A little bit of singing in between a tiny bit of horror and the many private lessons about literally anything make her channel very unique! And most of all: It is a place to relax, to talk and to laugh together!

Previously, the sheep queen Inis has been a manly man that fell in love with the devil. It would give her everything she wished for, albeit soon the devil redeemed its price... However the then still very manly sheep refused to pay back the deeds! The devil did not hesitate and turned the man into a demonic sheep with a humanly figure. Now wandering around looking similar to an animal and totally different from the other humans, Inis is being rejected from human society. Now unable to die and while roaming around, the sheep found it more comfortable to hang around its own kind. As time went on, thousands of years later, the human culture still gradually blended into her life. Still cautious of it, because of previous encounters with the humans, she only adapted little by little.... until this thing called the INTERNET piqued her interest. The whole bandwidth of content inspired her immensely, but most of her attention went to human stem cells. To get to know more humans and therefore to collect more stem cells, she finally decided to become a full-fledged VTuber!