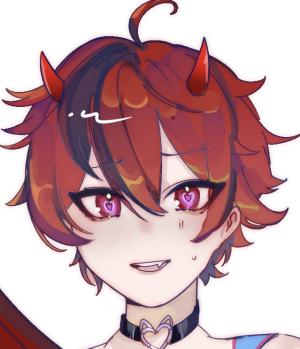 HydrophonicsTV is a femboy Virtual YouTuber and Streamer who makes content in English. Her first avatar was made by Mutt927 which Was A VRM3D model. The second model was made by a miss Dippie0_fresh A.K.A. Lady_Fresh on fiver and Is a Live 2D model. Hydro is best known for being a brat, Playing Escape From Tarkov, Making future funk music, And Being able to do lewd jokes around viewers. Hydros viewers are best known to bully her with sound redeems, Making her put on her maid outfit, And making her admit that she is cute, Even though she openly denies it...

HydrophonicsTV Used to Be Known As Charles Gumpton, In 1901 He was Birthed By Diane and Jefferey Gumpton of Portland Maine.

During His Youth, All Charles Ever Wanted to be was a Singer, Unfortunately His Dad Wanted him to be a SpeakEasy Lookout At Bramhall Portland. His Father Would Beat him Regularly and Degrade him if he caught him Singing, And Would Call Him A Sissy Reguarly. It wasn't until 1915 when His Father was Severely Drunk And Decided To Dress Charles Like a Girl For His Poker Buddies To Laugh At... Well that was the last straw for Charles, That Night He Decided to Poison his old man, and flee in the night, Catching a railway to new york city.

When Charles Arrived in grand Central, He was Ecstatic to be out of maine, But Due to the trauma he endured he decided to hold of on singing and since He had nowhere to go and little money, He to beg on the streets for money, since he had

In 1916 after a year OF Being Homeless, He came across Tumelli's An italian restaurant on the east side of brooklyn. Paulie Utselli, Was A Top Ranking Soldier of the Tumelli Crime Family

He Spotted young Charles Eating Spoiled pasta out of the garbage

He said, "Hey Kid, What Are ya Stupid or Something, Get out of here..."

Charles Replied... I'm Sorry Sir, I had nothing to eat, Please don't report me to the police"

Paulie then said "Alright listen, I'm not Supposed to bring Straglers in from the streets, but you got some honesty kid, How bout you come work off that pasta you just Ate, and we'll get you a bed to sleep on till you can find a better place."

In 1925 Charles Had Rose Up The Ranks, And Became a Respected man In The Tumelli Crime Family. In 1926 He Opened his own SpeakEasy And Began Performing Jazz with his Friends Donnie And Luis every Friday night. His Place Was Spectacularly Built, On one side A Simple General Goods Store, On The Other, A Big Band Bar Room, It became the hottest Joint in the 20's

Unfortunately It all Came Crashing down in 1932 one year before the end of prohibition, Police Raided The Brandamer SpeakEasy, And Unfortunately A Firefight began.

And So Began Charles Afterlife in Hell

He was Instantly transported into a body he feared the most, A femboy twink body...

He Panicked as He Was Branded with the Incubus Brandings, then Droped in for processcing Which Ironically looked like a DMV only More Molten

Charles walked Shakily to the line in which he was instructed, and led to an Office...

He had horns and fangs and a tail, but other than that he looking like an average guy

"Where Exactly Am I if I'm in Hell, Where's The Torture?" Charles Said

"Ahh Well, See you're a Special Case, We Aren't Going to give you the Painful Tortures. HOWEVER We went with The Psychological Tortures... See For yourself" Komm then Handed Charles With A Mirror

"Bingo!" Komm Said "and you are going to Be, Drumroll Please...." He started to bang his desk like a Drum "An INCUBUS!"

"This Can't Be Happening"

"I'm afraid it is Bukaroo. Well The Exit is out the Door and Make sure you listen to your contractors... I mean if you don't want pain that is"

of Hydro The Femboy Incubus...