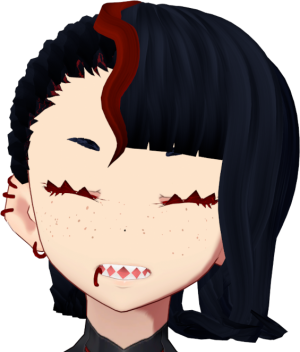 Reda-Ou is a last of a ruined ancient society from another dimension, they now stream as a virtual youtuber to learn more about Earth culture!

Top of the most-wanted list of the Calumnian Protectorate. After capture Reda was put into an permanent stasis in a dimensional prison. Long after the ruin of the Calumnian society, a crack in Reda\'s stasis opened, and they were eventually released.

Finding themselves in another dimension, with no hint of their previous world, they searched relentlessly for some meaning in life, eventually finding Earth.

They now sit in geosynchronous orbit above Australia and stream as a way of educating themselves about Earth societies and cultures.