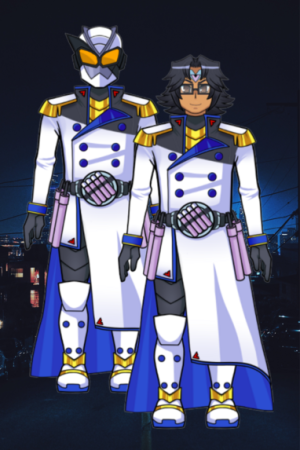 Azure is a very chill 2.5D English VStreamer from the States. He primarily plays a lot of JRPGs is laid back, and loves gushing over how much of a weeb he can be. He loves to chat with you, bring up a topic and can talk for a very long time about it while he grinds in the aforementioned games in the background.

In the manager's room of an arcade, under the sound of tokusatsu reruns and idol music, the sounds of something being built are heard. He did it, the Staging Heart system was reworked, this time instead of just changing him into the 2D world, he finally was able to get the powerset he wanted, the power of the Herotaku.

Azure works tirelessly to work against his greatest enemy, the same enemy that gave him the strength to fight, his backlog.