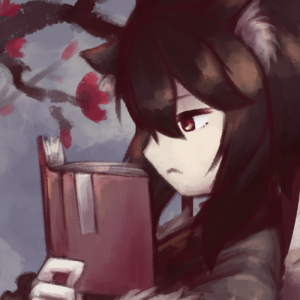 A vtuber who uses multiple models as part of her lore: A cat familiar named Heicaite, and a witch who just calls herself such.

Heicaite is a witch's familiar who was found as an injured stray cat. While recovering, she would learn to read and practice art after watching the witch do that herself, especially when the witch wasn't home. But when she was, she was often tired and stressed from work and sought the cat for company.

The witch would take notice anyways, after seeing books and paper strewn about her home for days. Having grown amused by this, she granted Heicaite a human form via a ritual. That form was made to better express her love for art and literature and improve her craft.

This doesn't stop the witch from being away when she has to, which makes Heicaite lonely. So she began streaming to curb that loneliness. There's also a lot of books in the witch's library that she hasn't read yet.