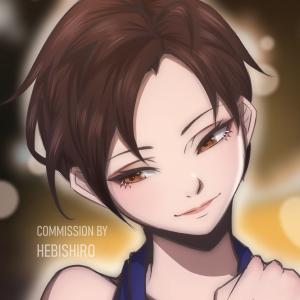 Felicity is a female lewdtuber who acts as a mother figure to her community. Known as Stream mom she plays a variety of games, sings karaoke and chats on her streams. She also allows her discord to pop into her streams to say hello or generally cause chaos. She knows some Thai and Japanese. She also does a lot of support work, retweeting Vtubers who @ her and adding people to her guest list to have on her show Welcome to the Hayami Estate. Loving every moment she is Stream mom, she spreads motherly love to everyone while also being stern when she needs to be.

The Felicity we know is known as Felicity Alexei Hayami and is from Earth 223 of a larger Multiverse.

A human woman who became a god after killing the original god of her multiverse alongside her partners. She has many children in her world and tends to adopt others as her own as well. In her world she is also an Author, Scriptwriter and Performer.

She is married to fellow Vtubers, Grim Graham, Sir Stillspear and Kaizen, having many children with all 3 of them. Born into an affluent family, the Hayami family are one of the top 3 families in Japan. The other 2 being the Tokiyami and Kageyami families. Felicity is the most humble of the 3 heiresses. One of her sons, Ichiro was originally her Male alter before making the decision to be reborn as her son to stop a child from being stillborn as they were born without a soul until Ichiro stepped in. Now he also works as the current Ward of Earth 223 in which Wards are balancers of the world they are charged in. Every Ward is either Felicity or Ichiro or both in some way, shape or form.

Ichiro is a mysterious character who has a personality that makes you wonder what goes on in his head. In total, Felicity so far has had 6 children with her 3 partners. Felicity's home is a large Estate in Kyoto which is 1/4 the size of the city of Kyoto, thusly it has almost everything needed for her to live off everything on the property without having to leave the grounds.