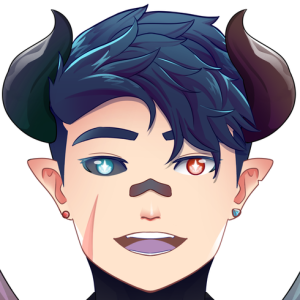 Eneli is an incubus demon with a multitalented artist who does multiple artistic things Like Art, music, and game-making

Eneli is a demon test subject who has all the demon genes mixed in his body. He was teleported to a different dimension on the first test because the lab got attacked. on the other dimension, Eneli was raised by a succubus which leads to Eneli's current form. but after a few years living with the succubus, one day, a demon queen was finally able to track Eneli and took him away by force from his mother and he got brainwashed by the demon queen afterward.

Eneli, who is built for war has his emotion wiped and is a killing machine that will not stop until his mission is completed. he feeds on magical or physical attacks. the only thing that could give a scar on Eneli is a Holy weapon or weapon that has been embedded with holy magic. The war proceeded for more than 400 years. Eneli shows a great contribution and was chosen to be one of the 4 demon commanders after the previous commander has fallen on the battlefield.

but things proceeded in a different way, the whole war was all been orchestrated by the third party to destroy the harmony of the creature that lives in the world the Eneli Live in. The race is Alien from another planet. they want to collect the resources on the planet. they realize that the people who live on the planet would wipe them out if they are trying to attack them so they decided to use their geniuses to make the enemy tear themself apart so that they would not be able to withstand their attack when the time comes. Too bad their plan was uncovered by a human before it came to fruition.

the human boy risked his life to convince all the nations in the world to work together in order to stop the attacks of the Aliens. Luckily one of the demons have the ability to read the mind was able to see the truth. After a tedious discussion with all the races and tribes, an all-out attack was launched against the alien, but the attack was quickly failed cause they don't know the full capability of the Aliens. They were decimated by a ray of light and from all that, a couple of people were able to survive which including Eneli. but almost 70% of the troop got eliminated. one good thing is the weapon that fires the lights broken after firing the attack.

after a few hours, the war almost came to an end, but then the Alien bring out their last card, an alien who height of a giant with an unparallel fighting capability.

The outcome seems grim, all cannot inflict damage to the giant. at the last moment before a big attack from the Alien going to happen Eneli tapped his past memories of his life before he got brainwashed along with the emotion that has been locked. with all those pent up emotions that have been collected for over more than 400 years make Eneli go overdrive, he uses more power than his body could ever hold. he uses his final form which is a perfect mix between his newfound emotion and his multiple demon genes to do a final blow to the giant. the giant was downed and killed but at the cost of Eneli's Life. at the last moments, the memories of his mother's words flash before Eneli passes. the Aliens, have no more cards up their sleeves either got captured or killed.

Email opens His eyes, the people in white coats run around in panic. then Eneli was released from a tube filled with green liquid. Eneli wonders what has happened because he remembers he is dead. then a silhouette came to the room. it is the demon queen, she explains that its been 5 years has been pass since the war. and the researcher has been trying to bring Eneli back to life because she wants to apologize for all that she has been doing to eneli. all the people have reached common ground and no more war. And through the use of demon technologies, the world has improved to a totally better place. and before departing from the lab the demon queen says "what do u think about being a Vtuber?"

extra: After all the war Eneli go on to explore the world, on his way he found a couple of children and decided to help them. He also create a few new beings along the way by helping the researcher in the lab.