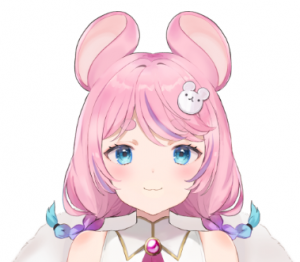 Emiri Kura goes by the name Eri and streams mostly games but also does a variety of stuff such as Karaoke, chill chat with viewers, learning new languages and more! She loves to sing and is working hard to provide more covers. Her first cover is a song called Torisetsu and it was released on her debut to dedicate to everyone who starts this Vtube journey with her.

Emiri Kura is a pink mouse VTuber who loves to sing and eat ice cream. She was once a human but was turned into a mouse by an unknown Goddess when she turned 21. Now that she can't work outside with her ears and tail, she has set her journey as a VTuber to survive in the world she was born in.