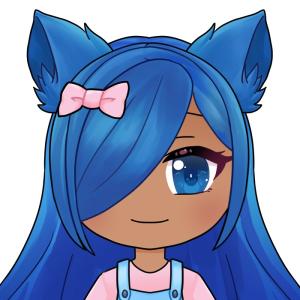 Cyannica is a Seiso, family friendly, dog Vtuber who creates comfy content. She mostly streams games (these including, D&D, Apex, Terraria, Spiritfarer, Rune Factory 4, and more!), with the occasional book reading ASMR streams. She wants her streams to be a comfy place where people can relax and experience an anxious-free environment

Cyan is a dog from a world different than the human world. In this world, there are no humans, as most of the inhabitants are four legged, animals such as dogs, wolves, cats, deer etc. One day, Cyan stumbled upon a portal. When she stepped through it, she reappeared in a new world surrounded by these new creatures called humans! She next looked down and noticed that she had a human body too (but for some reason her dog ears and tail still remained).

She then spent the next few years jumping back and forth between her world and the human world, as she was absolutely mesmerized by this new world she discovered. Technology in this new world was big and she wanted to get to play with all of it. Over time, she learned the human language known as English and she used to this knew knowledge to learn how to survive in this world. She eventually found a place to stay and completely moved into the human world. She discovered streaming one day, thought it was fun, and the rest was history!