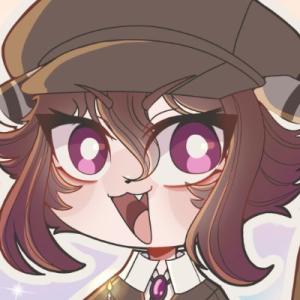 Chifuyu Akashi is a raccoon detective who is also a streamer, artist and voice actor with a love for RPGs and story-based video games. They primarily deliver content in English, and mainly use Twitch as a streaming platform.

Upon descending onto the mortal realm, they lost their memories as a celestial being and found themself in a forest, alone, and in a new form. They took the form of a raccoon. They even forgot their own name. Lost, they looked around to search for a place to take shelter in. Eventually, they manage to find a cave where they could grant themself some respite. It wasn't too long until they were found by a bunch of raccoons, and Chihiro began spending their days with these raccoons. The raccoons would then give them the name, "Chifuyu Akashi," and took care of them as if they were their own.

From burrow to burrow, Chifuyu and the raccoons would then move from one place to the next, scavenging food and finding new places to live in. On one of their hunts, the raccoons found a trashed game console that still worked, and took it to Chifuyu, thinking it would please and entertain the young raccoon. Not only did it do just that, but Chifuyu absolutely adored this gaming console. They would play for hours and hours on end, and developed a love for video games.

But soon, Chifuyu would learn that all good things will have an end.

On one fateful evening, one of the raccoons could smell smoke. Chifuyu could still vividly recall the ashen blazes within the night, the resounding screams of the nearby animals and the others who struggled with to their dying breaths just to live. The raccoons were trapped in a burrow underneath a tree. Its roots were like a natural cage that kept them from escaping. Death. They could almost taste it. Closing their eyes, they prayed to the heavens above that it would at least be a swift one—that they, and their family of raccoons—would be granted this as one final reprieve. It was then that the celestial blessings from above were granted back to them, and Chifuyu could feel the goddess of light's power once more. They spread their white-feathered wings and used their angelic powers to free themself and their family from the confines of the tree roots.

While that action was enough to give the raccoons the moral boost they needed, there was still one fatal problem: the forest fire. The power of the gods was fleeting, Chifuyu could feel it draining the very essence of their soul. But they still tried their hardest, allowed their resolve to push them forward to save their family.

...However, try as they might, it wasn't enough. Caught in their determination to save their family, their wings burnt up, along with the rest of their power, and they fell back into the raging flames. The raccoons lost their lives to the wildfire, and Chifuyu was left alone amongst the burnt ashes of what was.

As if it were one last blessing from the gods above, Chifuyu's form shifted into one that was more humanoid-like, however, they kept their raccoon ears and tail as a sign of the past. A bittersweet reminder of the days that they loved, and the failures they regretted.

When Chifuyu woke up, they found themself within a bright white room. Unfamiliar territory, but the raccoon figured out it must've been a man-made structure. There were wires and tubes all around them, and even a wall that reflected their image back to them. Strange. They didn't recognize what they saw. Nor did they recognize those fleshy limbs and that long brown hair.

A loud thud. Chifuyu shot upwards and immediately shifted to their attention to the one responsible for the noise. It appeared to be... a door...? A human, wearing white, enters, and begins to survey them, asking them all kinds of questions that they didn't know the answer to. Upon realizing that their line of questioning was futile, the human left Chifuyu alone to their devices, where all they could do was sit and watch the moving pictures along a black box. To Chifuyu, it was reminiscent to that of their video game console. Oh, how they missed it so...

They would then eventually drift to sleep. Although, it was soon interrupted by another human, who would survey them like the last human did. Confusion would move within the raccoon. What were these humans doing? Why exactly were they fussing over them? Human after human after human would visit them and repeat the same routine. And sometimes, they would arrive with stale food and ice-cold water. Piecing together the information that the humans were saying, Chifuyu learned that they were being treated. But for what? The humans didn't exactly know. They should've gotten burns from the forest fire that they were found in, yet they had none of it. And upon their discovery, was a pool of burnt-up white feathers.

After a few days, the humans told Chifuyu that they could leave. They were even provided clothes upon their departure, and a few snacks to survive on because they were "new to the area". Exiting the man-made structure, Chifuyu would discover... a mass of man-made structures, spread althrough out the area. Asphalt road stretched before them, and moving machines—cars—traveling across it. Again, unfamiliar territory. But they began walking anyway. They searched for a sign that could indicate where they were, or even anyone who could help them. If only they had the courage to approach people...

It was then that they stopped before a large brown building. Finally, this one had a sign. It read, "Sima City Investigation Agency," and Chifuyu took this chance to enter and discover what this place was about.

This was the start of a new chapter.

A few months later, the name, "Chifuyu Akashi," was relatively known in their little district. They earned renown from resolving cases and climbed the ranks of the investigators. Chifuyu quickly learned of their surroundings, as well as the ways of the humans. When they earned enough, Chifuyu was able to buy a gaming console much like the one that the raccoons had found for them. It was as enjoyable as they remembered.

From time to time, their fellow investigators would catch them gaming. They would watch them at times, and mentioned to Chifuyu that they should give streaming a try. Now, this was a new term for them. What was this... streaming? After some research, they found that people broadcasted themselves playing video games and other miscellaneous activities online. As per their co-workers' suggestion, they decided to try it out.

The happiness that those who watched them play video games was infectious. Chifuyu realized that they had great joy spreading such positive energy to even a small community.

Little did they know, by spreading this positive energy, bit by bit, their celestial powers were returning to them. The goddess of light was not pleased with the loss of one of her children, and she will do what it takes to welcome them back.

And thus began Chifuyu Akashi's debut as a VTuber.