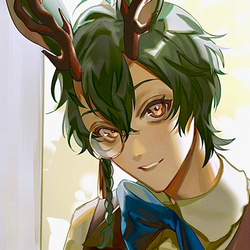 Caz is a Non-Binary Vtuber on Twitch. They stream a variety of things, ranging from games to art and karaoke. Born in Germany they speak both GER and ENG fluently. If you drop them a question in either language, they'll be glad to answer. Their wish is to create a safe space for everyone whilst offering chill and cozy content, which may be a tad bit sussy at times.

Caz' personality type is INFJ-T, which makes him an idealistic and perfectionistic individual.

They typically stream Mo - Wed - Fr with occasional streams on the weekend.

Caz is a Wolperinger currently residing and working as a curator in a place called "The Archive"; a place where all stories within our world are being kept.

As a small child, Caz was shunned upon by society for his horns. The wolpertingers were seen as a bad omen and thus his parents left him alone to die in a forest filled with foul beasts and many other hidden dangers.

After trying to find his way out and having to face a plethora of dangers he almost gave up.

That's when a mysterious being he now refers to simply as "Master" has showed up and saved him from incoming foes. The black shape, scaring Caz more than anything the young lad had witnessed thus far, offered the boy to take him under his wings and to teach him all about this world we live in. The only condition being to help him collect all stories known and unknown to men. No matter if they are fantastical or factual in nature.

Reluctantly, the horned child accepted his offer and thus his life as an archivist began...