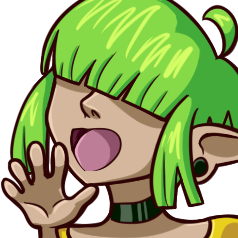 Calidori is a robot Virtual Streamer and artist who makes content in Portuguese, English, and French. She streams every Monday, Wednesday and Saturday at 8 pm BST/3 pm EST/12 pm PST.

She was the fourth robot created by two individuals as a servant for an adult themed club. She was used to provide pleasure to humans. Despite having very advanced AI, she was basically kept prisoner at this establishment and any attempts to rebel against her program and escape, earned her a system reset. One day she realized this. Her intelligence and self awareness grew over time and she knew to keep it all under wraps as to not set off any alarms from her developers. After faking her obedience many months, Cali knew her developers would go on a lavish vacation and managed to install an extra power supply as backup since the developers would cut all power to the location before leaving, including emptying the batteries of every robot they had.

Once her battery was depleted, the power supply kicked in and she powered back up, she disconnected from her power station and attempted her escape, unbeknownst to her, the system was prepared to deal with eventual rebellion attempts by frying the circuits of every robot, which unfortunately managed to take down all of her friends permanently. After mourning her loss, Cali had to keep it together and leave that wretched place for good.

These events managed to get the attention of the police who later arrested the developers for tax fraud and various other felonies.

The presence of robots in the year 2136 is very abundant, however they are not to roam without human supervision. Cali has had to remain mostly hidden to avoid being captured and reset. Despite all of this, Cali has opened her very own cyber neon Boba Shop which she opens exclusively at night for humans and robots alike.

Cali upgraded herself and is capable of processing organic matter just like any living being. She also has quite the personality. She's sassy and isn't afraid to speak her mind. She knows no taboos and loves to engage in deep meaningful conversations.

Her creation led her to have a distaste for sex. Although she enjoys sexual jokes, sexual activity of any kind is completely rejected and off limits to her. Thus, she identifies as Asexual.

As time went on, Cali embraced being a robot and slowly began to ditch the elf look and started showing her true form and voice to trusted friends and viewers. She also made some upgrades to distinguish herself from her past.